AUDIO IS VERY IMPORTANT TO THIS GAME.

Also note that Firefox has problems with the browser-build. I'm sorry. If I ever manage to find out how to fix it I will.

This is a comedic visual-novel about office relationships. It was made for the 2015 WizardJam.

I really enjoyed this, I really felt Tiffany's frustration haha

Actually this is really good. I like the narrative. The art really really draws you in. I played this one weeks ago or longer and it's lingered about in the after-sense of things. I felt almost as if both groups were in the wrong. Both the character complaining about every noise, slight and heavy. The interaction with the people and animals on the different floor are a bit uncomfortable not on the surreal conversation side, but that it could hit close to home for many of those who go in to get a job done to get dissuaded by detours.

I haven't replayed it yet to be ruder/nicer and it's one of those games where I really stopped to think about what choices to make. That is one of the superhuman powers of a visual novel; a time to reflect is its staple.

It's definitely worth a play and/or download. I reloaded this page using a chrome derivative as fumblefox and icedragon choked on it a bit and the menu didn't load up but that's part of the charm regarding online games in this still kind of new medium. I encourage others to check it out and no reply necessary but to share their thoughts on it to see where we stand on interpreting this short adventure. I stand that it has a unique narrative that I haven't seen in other standard (insert long acronym here) visual novels I have seen and almost a breath of fresh air even for just the visuals and sound alone. The euphoric key presses and the flow all around make this and the story just kind of pieces it together. These people were brought to life; they weren't reanimated per say but animated for the first time!

Lastly some unrealistic and much more than decently written conflict settlement takes the cake at the surprise ending you'll never believe. 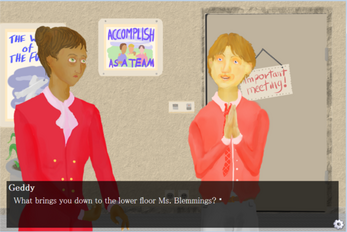